Mighty Maverick’s Merchandise was started out of necessity. Gracie (12) and Emma Pearson (14) were looking for ways to create an income for themselves, so they could pay for their own entry fees and buy things they wanted that their parents didn’t feel were necessities. Since they were young, they weren’t able to go out and get a typical job like working at an office or a restaurant. And they needed something that allowed them to have the time to go to school, ride their horses, do chores, and go to rodeos. This is when the idea of starting Mighty Maverick’s Merchandise was born!

What’s With the Name?

Both Pearson girls had the pleasure of riding one of the greatest ponies a girl could ask for. “Maverick” was a quarter pony that was purchased for the girls a number of years ago, from Rachel Calvo out of Bassett, Nebraska. He helped Emma overcome some fears of going fast on a horse bigger than a shetland. She ran barrels and poles on him, as well as learned to tie goats off him. 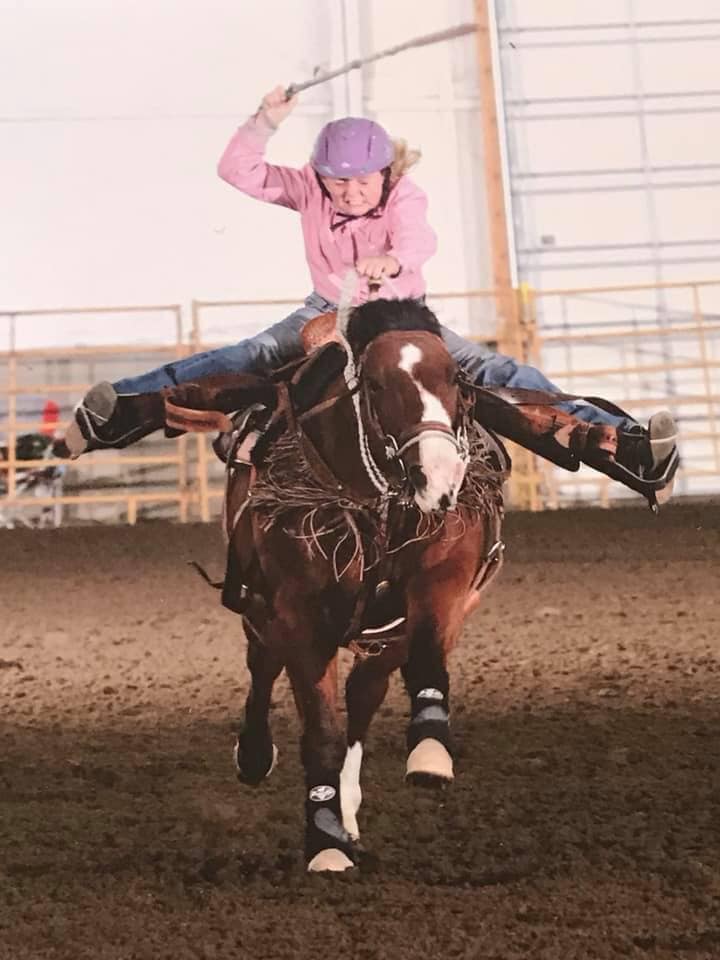 was needing to step up to a bigger pony from her shetland, so Emma moved up and Maverick and Gracie teamed up to become “famous” in central Nebraska. This team went through all of the 4-H events, from winning Grand Champion Pony, western pleasure, English pleasure, trail, to barrels, poles, and goat tying. Gracie and Maverick earned the Jerry Eberle Super Horse award in 2018 for a well-built “horse” that could do it all.

As Gracie entered the 6th grade, it became apparent that to be competitive in Jr. High Rodeo ranks, she was going to have to be mounted on something with a little longer legs to stand a chance. So the search started for another little girl that would appreciate Maverick as much as the Pearson girls did. Luckily Maverick found a great home in the middle of North Dakota with a wonderful family that appreciates him as much as the Pearsons.

After Maverick had left to go help the next little girl gain confidence, his influence on the girls was still apparent. Maverick was and still is very near and dear to the girls hearts; although he was small, he was mighty! Maverick was an all-around pony who did everything the girls could think of—from trick riding to jumping while Gracie was swinging a rope! Maverick was no ordinary pony! He gave 100% every time he ran through the gate. So it was only fitting to name their first company after the pony that gave them confidence and inspiration.

Mighty Maverick’s Merchandise sells handmade items like halters, barrel reins, split reins, roping reins, dog leashes, and whips. All of the items are handmade by the Pearson girls out of various braids of mule tape. Mule tape is a very strong polyester fabric that can hold up to 1,800 pounds with just one strand. Why does it need to be so strong? It is the girls’ belief that it is dangerous to have an inferior product that could possibly break and your beloved animals would get away. They feel by creating a strong, quality product that won’t break under the pressure, they can best serve their customers and their pets!

Contact the Pearson girls to get your halters, reins, or dog leashes ordered through their Facebook page, Messenger, or through our email.